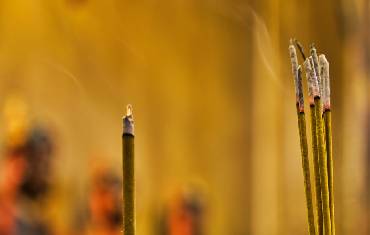 There can be many reasons behind lighting an agarbatti, the primary one being religious ceremonies. In India, mostly Hindus have a strong bonding with the agarbatti and diligently light one during the morning prayers or pujas. They believe it helps them connect with spiritual connectivity. However, there are plenty of other benefits that an agarbatti has to offer apart from connectivity. These benefits range from psychological to health to being a disinfectant. Let’s explore the benefits of lighting an agarbatti in more detail.

According to common Hindu rituals, it is believed that lighting an agarbatti removes all the foul smells and impurity that lingers around in the premises. It helps create a perfect ambience required for any religious ceremony or rituals. The combination of agarbatti and various religious customs is so old that the very aroma from an agarbatti gives a hint of a religious custom being held somewhere nearby. They are also widely used as a disinfectant to drive away insects and ensure complete concentration during prayers for the devotees.

The aroma from the agarbatti has been known to provide a very soothing and healing on the mind. The pleasant scent helps you relax your mind and forget all the worries that are troubling your mind. As mentioned above, it allows you to concentrate during prayers and meditation by reducing stress and depressing thoughts. For some, there are fond memories attached to some fragrances, so when they are away from home religiously light the same agarbatti, to remind themselves of their home and family.

Agarbattis are extensively used during yoga and meditation as no one wants to inhale toxicity while connecting with themselves. After a tiring day at home and office, many like to release the fatigue by lighting a genuine and naturally fragrant agarbatti that helps them lift their energy levels and fill themselves with much-needed positivity. Fragrances such as Jasmine, Sandalwood, and Lavender are known to hit the right chords and get you motivated.

As years and generations went by, other cultures from South East Asia have adopted agarbatti for their religious rituals. They have been using them for its wide range of other benefits.

Having known the reason behind lighting an agarbatti, it is of paramount importance that you light the right agarbatti for the right experience. Hem Incense is the leading agarbatti manufacturer in India and have been manufacturing agarbattis since 1983. We believe in the strength of innovation and creativity and manufacture products that are more customer-driven and fulfill their demands and expectations. Our agarbattis are a perfect blend of natural ingredients and fragrances. Explore our wide range at hemincense.com