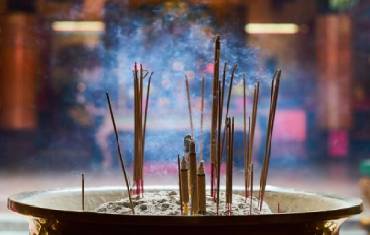 Once in our lifetime, we knowingly or unknowingly come across and experience incense in its various sizes and shapes. We see them being used at many temples, during religious ceremonies or some meditation and yoga clubs. Some of you must have smelt them at your friend’s house and got curious about what exactly are these sticks made of and how do they smell so good?

After some online research, you must have been bombarded with terms such as White Sage, Nag Champa, Palo Santo etc. But none of them made any sense or brought any clarity to your confusion about the fragrant sticks. Worry not! This blog is exactly what you were looking for! It will help you assimilate the origins and evolution of incense and familiarize you with their most common types and varieties.

What’s in the Name?

Incense has an ancient history, the word ‘incense’ comes from the Latin word, incendere, which means ‘to burn’. Incense are those products that burn and produce a fragrant smell. The ingredients for these products are available naturally, for example, sandalwood, resins, gums, flower extracts etc.

In ancient times, these naturally obtained ingredients were directly burnt to produce the incense. However, now they are worked upon, given different shapes and dressed up to look more presentable.

Just like fire, we believe the incense was discovered accidentally. The early men and women used naturally obtained plants and other materials to light fires. During one such exercise, they realized that different plants smell different when burnt. The education was then transferred from generation to generation, and it soon became an essential part of our present lives.

As civilization began to prosper, so did incense trade and incense manufacturers. The harvesting for incense products started at full pace. The prices for the ingredients were determined based on their quality and place of origin. Countries like India in Asia, Egypt in Africa, Greece and Rome in Europe formed the nucleus of this incense trade circle, eventually covering other remaining countries. Over the years, the incense trade continues to flourish between countries through different routes (and taxes).

The Shape of Incense!

Incense takes many shapes, sizes, and fragrances based on their country of origin and different cultures. The same applies to preparations; it varies from country to country and a purpose based on the beliefs and experiences. Incense is available mainly in two forms: human-made and in an original raw state. Incense sticks and cones are the most commonly found versions of human-made incense followed by essential oils, candles, and aroma spices. The older and simplest form is the original raw state which is used mainly for fumigation.

For this blog, we are keeping our discussion limited only to the most commonly found forms of incense, i.e. incense sticks. The original ingredients of the incense sticks include scented substances and a burning source. As mentioned above, the aromatic substances include resins, gums, roots, flower extracts and wood.

The burning source, however, may vary based on geographies, product availability and affordability. Earlier, fragrant wood chips were used as burning source, but as they are found to be expensive in the present market, they are being replaced by essential oils.

Incense, in its stick form, was introduced to the world by regions of South East Asia, they named it ‘Joss-Stick’. It was mainly used for spiritual and medicinal purposes; however, in the late 1600s, the common masses began the use of incense sticks for its fragrance. The sticks are now a common sight at temples, shrines or any religious ceremonies. There are two variants of incense sticks commonly found in the market: one with the stick and one without.

The stick variant is mainly consumed in India and many other regions of South-East Asia. The incense sticks made by covering the thin stick with incense powders and essential oils. The final end-product has a bare stick at the bottom, while the upper layer is covered in the incense mixture. Some people don’t like the smoke that accompanies with the incense when burnt, for them incense that has a sandalwood stick acts as an alternative.

The incense without the stick is largely consumed in Japan and Tibet. These variants are simply incense paste rolled in the shape of a stick and dried.

Other Forms of Incense

The different forms of incense include cones and coils. The cones found its origin in Japan which later got adopted in other parts of Asia. This form of incense gets its name due to its conical shape. The fairly newest version of cones includes backflow cones. These variants of cones have a hole at the bottom that goes all the way through the centre. The incense plume travels downwards through this central hole. The coil variants are found mostly in the temples of South East Asia.

Presently, incense sticks are known to be a calmness enhancer and a stress buster. They are now widely used during meditation and yoga sessions all around the world. They also used as a company during leisure activities such as drinking evening tea and reading. They have found a commonplace into our modern lives as a home fragrance by eliminating foul odours.

Hem Corporation is globally known as incense manufacturers that manufactures and exports the widest range of innovative fragrances to more than 72+ countries across the globe. Our incense sticks are handcrafted that diffuses an aromatic scent that lasts longer and leaves you enchanted with its purity. We also specialize in incense cones and backflow cones and incense stick burners and incense stick holders. Please browse through our wide range of incense and other scented products, here.