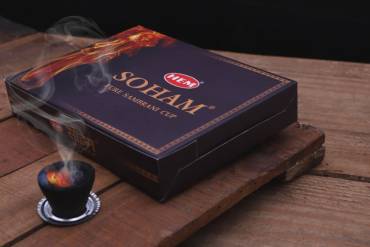 The mystic powers of history now available in a pack!

What can a bunch of resins and a little charcoal do together? Apparently a lot! Ancient Indians knew the power that nestled in small things like cute cups, camp suds & natural cups and knew just the right amounts to use for homes, workplaces and schools. And from this powerful knowledge was born the concept of dhoop cups. Dhoop Cups have been in use in India since ancient times. Dhoop cups had become a huge part of the spiritual lifestyle known to be true to India since the Vedic Era. This was often considered to be aiding the fight against stress and anxiety in daily life.

A small cup with a long history

The oldest source on incense is the Vedas, specifically, the Atharva-Veda and the Rigveda, which set out and encouraged a uniform method of making incense. Medicinal priests of the time, most likely understood the power of fragrances on the mind and created the relatively modern form is making incense – this is where the dhoop cups or black cups originally is said to begin. Ayurveda has been known to use the power of dhoop cup fragrances or the rolled dhoop popularly till almost the mid of the 19th century as part of Pooja supplies and stress and anxiety fighting supplies. Dhoop cups’ use in medicine is considered the first phase of Ayurveda, which uses incense as an approach to healing. Incense-making was thus almost exclusively done by monks.

The specific knowledge of dhoop or incense as a healing tool was assimilated into the religious practices of the time – early Hinduism. As Hinduism matured and Buddhism was founded in India, incense became an integral part of Buddhism as well. Around 200 CE, a group of wandering Buddhist monks introduced incense stick making to China.

The Egyptians were also persistent users of the Dhoop. They had a strong belief that each of the resins used in the dhoop or dhoop cups had their own magical powers. They also believed that the dhoop would keep them connected to their dead and hence the usage was widely popular.

Incense finds its mentions in the cleansing process for even the Zoroastrian religion.

Thus different religions have different usage for dhoop cups. But all religions believed that dhoop fragrances have the ability to have a positive impact on the mind.

This age-old connection of dhoop or incense fragrances has been viewed by scientists repeatedly and many studies have been conducted to that effect. Influence of Fragrances on Human Psychophysiological Activity categorically states that “The sense of smell plays an important role in the physiological effects of mood, stress, and working capacity. Electrophysiological studies have revealed that various fragrances affected spontaneous brain activities and cognitive functions…The studies have suggested a significant role for olfactory stimulation in the alteration of cognition, mood, and social behavior.”

The Discover magazine in its 2017 article ‘The Sense of Smell in Humans is More Powerful Than We Think’ states “Awareness of our innate smelling abilities, however, is complicated because the human language doesn’t have words for a trillion smells, and much of smelling happens under the radar of our consciousness. Unlike our other senses, the olfactory nerves do not proceed directly to the brain’s thalamus, the gateway to consciousness. Instead, information feeds from the nose to cortical areas to arouse emotions and memories without our awareness. When it comes to smells, people can be influenced and not realize it.”

This and over several thousands of articles, studies have established what our ancestors from India knew without validation – fragrances have the capability of positively influencing the human mind. Thus the significance of the dhoop cup and all its elements in the ancient temples right from the Vedic Era, to Hinduism to even Buddhism & Jainism.

The Magic of ancient Indian temples – now at your home

The ancient practices of making incense dhoops were simpler and each unit was handcrafted to perfection. The key ingredients would be the secret list of positive smelling resins, the right type of charcoal for temple usage and a simple biodegradable glue mix that holds the resins together with the charcoal.

The Sambrani Dhoop Cup brings to you this magical, ancient recipe for your home usage. While the actual ancient recipe of the Sambrani Dhoop Cup is secret, the major resin ingredients include powerful fragrances that aid spirituality, calmness & concentration. This apart from helping in the fight against stress, anxiety, depression. These include Copal, Frankincense, Myrrh & Guggal. These resins are natural resins originating from plants and are mixed together in a specific proportion to create the same fragrance magic for your homes.

While the sizes in the past have always been large – given that they were used in temples for common prayers and enabling people to pray together, HEM Incense has customized these to a suitable size for the home. Now getting the magic of ancient Indian temples is just a click away for anyone!

Using the Sambrani Dhoop Cup is as simple as it is efficient. The Cup is designed to make the usage process easier.

To be able to light it, simply tilt the cup to about 45 degrees. Light the cup on the tilted end for about 10-20 seconds. Once lit, place it on the Sambrani Dhoop Cup Stand.

Remember always that the Dhoop Cup Stand will be very hot for upto 20-25 minutes after the Sambrani Dhoop Cup has turned to ash. It is recommended to wait before cleaning it out. The product leaves a stain on the stand post the lighting process. Hence it is recommended to use proper stands for lighting this powerful fragrance.

Benefits of the Sambrani Dhoop Cup

The Sambrani Dhoop Cup combines many powerful resins together to create the right mix of fragrances. Each of these fragrances has their own unique benefits:

Frankincense works as an expectorant to clear the nasal passageway, promote the relief of congestion, and encourage easy breathing. It’s sweet, woody aroma is sedative and enhances mood by diminishing feelings of stress and anxiety while improving concentration and memory

This resin is well known for its pleasant, warm, and earthy scent. Myrrh oil has been used for medicinal purposes like clearing nasal passage, relieving symptoms of cold, relieving symptoms of pains. It is also known as one of the gifts given to Christ at his birth by one of the three wise men. It is believed to ward off bacteria, beautify skin and even induce a feeling of harmony.

This fragrance typically called the Mexican Frankincense cleanses the air and removes feelings of anxiety. It is a slightly denser and heavier fragrance and lights much faster than Frankincense on its own. Copal incense is a completely natural incense that is used to purify the energy of spaces, places and objects. It has a clean, light, woody scent that could be compared to pine or turpentine.

With such a huge change in lifestyle, home sizes, it became very important to merge the benefits of the ancient wise with the properties that make the convenience of Sambrani Dhoop Cup daily usage simple and elegant. Thus the shape of the traditional cup in a size that fits within the grip of the forefinger and the thumb. The shape is such that one can conveniently hold the bottom edge of the Sambrani Dhoop Cup while lighting the top edge without worrying about hurting oneself.

The look is also aerodynamic thus it works on the principle of reduced smoke and focuses on making the fragrance more dominant throughout your prayer, meditation, yoga or spiritual efforts.

Prior to using any incense stick, dhoop stick, fragrance oils or aroma oils, it is important to do a test to check if you are allergic to the smell. Additionally, it is also important to note that any incense should be used intelligently, in the right kind of holders that don’t pose fire hazards and adjust the size of the incense or dhoop stick proportional to the size of the room to avoid creating an overwhelming fragrance.